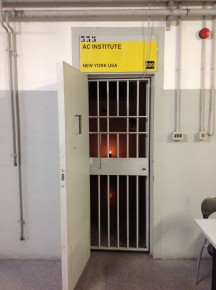 Site specific  art installation in a cell in a former prison at the Others Art Fair, Stay Gold, Turin Italy. The images are from other locations in  the prison.   I created the installation that was changed daily and Roberta Marroquin took the photographs. I draped masses of white string, to appear to me webs, around the cell. Candles were light and the windows were blocked. Only three people at a time were allowed to entire the space with a small flashlight. The two heavy cell doors, that creaked, were then closed behind them. They looked at the space and the pictures of the prison that Marroquin took every night and were added the next day before the fair opened.

We were interviewed several times and congratulated on using the cell as a cell. The prison was open from the late 1880s and closed in the early 2000. There is a long history of the prison that is posted on the next. It is a place filled with ghosts. People lined up to see this site specific installation. Over four long days approximately 1,000 people, that is a minimum number, saw this installation. Thank you! 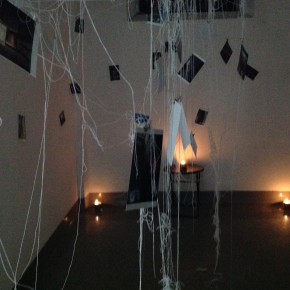 Art Alchemy, the other project listed here is on  separate page. I tried it our here for the first time. It  is a project that I did with people who were waiting in line to see Through the Cell Darkly. 80 people participated and  I transformed a gold envelop and black sealing wax into an art object that I then gifted back to the participants.