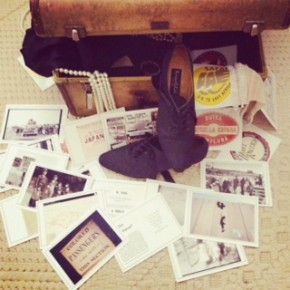 Text cards and other props for performance in the Research Pavilion at the Venice Biennial, October 1, 2017

Issues of “other,” privilege, denial. It’s easy to become other.

Performance: I’ll walk around the space, a dimly lighted space, with an old suitcase with high end travel stickers. I’ll be well dressed wearing costume diamond and pearl jewelry.   Maybe I’ll sip some champagne.  I’ll look at the newspaper and drop it. The cards, postcard size, has text one side and images on the front. There will be approximately 80 cards. I’ll look at them and say the text. I will then drop the cards on the floor, toss them or hand them to people. I’ll ask someone  to read one.  During the performance, I will drop some of the jewelry.  Their card will say: (1)  Who are you?, (2)  Why should anything happen, to me, or(3) Oh, so sorry.)

The images are from photographs and objects that are in the public domain and under CC.  The places and events represented on the cards from things that we try to push to the back of our minds. A history that some deny.  A history that many want to forget. A history that others say is the past. It’s not.

The images are of fragments of laws, such as the governmental law that removed the Native Americans from lands east of the Mississippi in 1830, the Treaty of Gaudalupe Haldigo Treaty that took the west from Mexico, photographs by Ansel Adams of Japanese Internment camps, Concentration camps, Armenian Holocaust, American segregation poster removed by my grandmother from a train car in Baltimore, and the wall encircling the Palestinians and other images.

Most of the text is based on the story of Austrian art Paul Cohen-Portheim who wrote about his experience in a British internment camp during WWI which was part of my research on enemy aliens, but it plays with privilege too.   ( I discovered I  had a great-grandfather who also was caught up by being in the wrong place at the wrong time.

Who I’m I?  My ancestors are Mennonite,  a McIntyre, Jews and ‘Mulatto.’ The Mennonites were persecuted in Basel, convicted imprisoned and moved to southern Germany, but were only allowed to farm.  I have a McIntyre who was born in NY in 1806.  And many others.