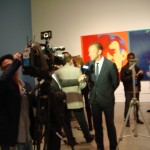 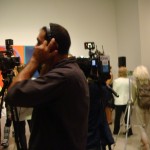 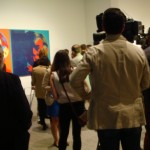 Warhol’s factory! His process, which was his legacy and influence, and not the objects, is what is missing here. It’s also overwhelming. Feel like one is being slammed in the head with a Sears & Roebuck catalogue on Pop art. There is nothing subtle and nothing new. To reference both Benjamin, and one could also toss in McLuhan, this is the age of art in mechanical reproduction and mass media is the message. The reproduction of the image, of a person or object, in mass media makes the celebrity. Recognition is the important element. Warhol obsession and understanding of mass media, making himself into a celebrity object, at the sometime that he stood back with his little box camera and recorded the world. This is the essence of Warhol work and his influence is the what was removed from the thematically organized exhibition at the Metropolitian Art Museum. Warhol is not about portraits and figure art. His influence is concept and process. It is possible that this is discussed on the headphones or in the catalogue, but it is not visually apparent. Instead we wade through a sea of objects, some by Warhol (approximately a third) and the rest by artists who were influenced in a very direct way by Warhol. That approach, to look at who and how an artist influenced others is acceptable and tried path in art history. The end result does not get across what Warhol’s major influence on contemporary art was and is today.
It has been fifty years since Warhol first exhibited his paintings of the Campbell Soup can labels. Even though the exhibition is arranged thematically, that was the starting point. It could just be a exhibition call Regarding Warhol, 60 artists, But instead it’s Regarding Warhol, 50 Year, 60 Artist. As part of this exhibition the Campbell Soup Company, one of the sponsors of the exhibition, Warholed their tomato soup can label. The Campbell Soup Company Warholed their tomato soup label with quotes, image, signature and jazz colors, making a limited for a limited time an edition that is available at Target. It was iconic and now it’s a miss mash. The mass is the corporation is now in control. For Warhol the images that commercial art produced, such as the Campbell soup label was art and something that we should look, everything is art and everyone is an artist, at just as earlier artist pointed out the beautiful landscape or the beauty of domestic life. The mass media images were also something that was part of all of our experience and memory. We all experienced the same thing. We all eat the some soup. The Met organized mass object laden exhibition by Warhol and artist he influenced without the message. 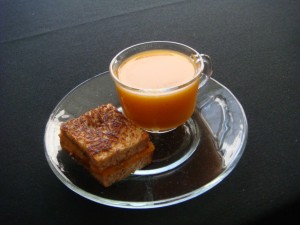